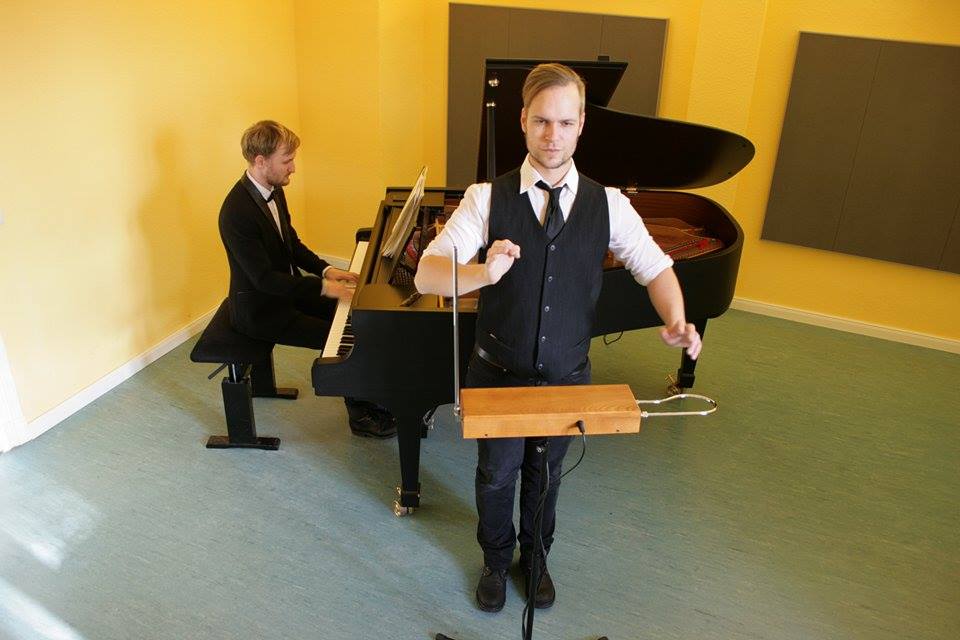 Robert Meyer Born 1982 in Wolgast, former GDR Growing up at the Isle of Usedom as the son of artists. Early interests and educations in painting and making music. Composing and foundig music groups since the age of 12. 2003 going to Berlin, working as production leader in a movie company. 2007 self employed as artist and leading an own gallery. Exhibitions and concerts in Berlin. 2014 going back to Isle of Usedom, Zinnowitz. 2015 marrying Stefanie Meyer, son Edgar is born, starting to play Theremin, record releases, exhibitions, concerts around europe.
Facebook – https://www.facebook.com/ThereminMeyer

Clara Rockmore was the first person I recorgnized on Youtube, of course long before Google made her public. I was impressed by her feeling and her exactly playing on this old valve Theremin. But after seeing the interview with Bob Moog at her home, i also realised that she had to be a very very symphatic, intelligent person that i would like to meet, if she was still alive.

My mother told me about, when she was a child in the 1950s, someone used it making a concert at my hometown in East-Germany. She was allowed to even play around on this magic thing. So since i was young, i also wanted to try out this instrument. In my own compositions, i used synthesizers to simulate a Theremin. I always thought, only a few persons still have an old Theremin and its impossible to get one. 2006 I was in Munich at the Museum of Technic, there was a one-antenna-Theremin I tried. It was so frustrating, that I thought i never can play on this strange box. But then i discovered Moog and the Theremins got cheaper, so the wish became true.

The first time i heard a Theremin, was in some old science fiction movies and in the 90s, someone did demonstrate it in a tv show. I was completly fascinated and i did know, this thing that name i didn´t know, i have to play someday.

Music is free. Everything is possible, thats made with passion and seriousness. The Theremin is my voice i can transmit music to a higher, special, outstanding level. Including the kind of the performance. With my Industrial-Band SCHRAMM, i switch between singing and playing melodic Theremin to very hard guitars and danceable beats. In this energetic performance the Theremin is an isle of silence.

I think the Theremin could bring a kind of fairy and magic back into modern music. In times of cold high-end productions and videos of button-pressing DJs jumping around, the Theremin shows a true and unique image of musicality and body control . But if you look around, the most bands use it only for effects or use the pitch-correction of the Theremini. That doesn´t make so much sense for me.

Until now, Moog ( Etherwave Standard modded with the Espe-01 of Thierry Frenkel ) and Subscope, Kiel Germany.

Play melodies. Don´t use the Theremin only as gimmick or for effects, it is a waste of its potential. Do not buy a one-antenna-Theremin. Be clear that results can take a lot time. Be clear the the Theremin is a very sensible instrument, reacting on many physical influences. Practize and try so often you can. Let it be your main-instrument you invest most energy. Watch the Youtube-videos of the professional players and try to visit Theremin Schools.