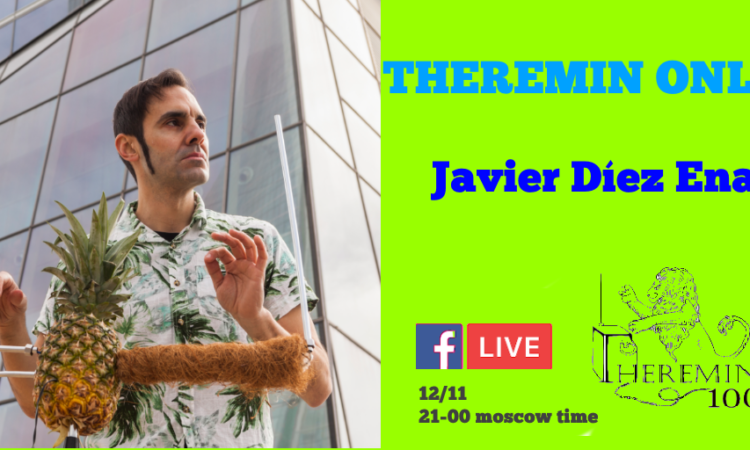 Dear friends, we continue project of Theremin Today called “Theremin Online” in the days of quarantine it will make you a little closer to some of the leading and inspiring theremin artists .
Our guest 12/11/2020 – JAVIER DIEZ ENA (SPAIN)
1. you can send your questions http://m.me/thereminrussia/
2. we pass your questions to Javier
3. Javier
answers your questions in Theremin Today broadcast .

Double bass player , thereminist and electronic musician. Most of his musical activity (out of his theremin work) is bound to avant-jazz band Dead Capo, playing numerous concerts and festivals all over the world.

Also member of other well known spanish underground bands like Ginferno and Forastero and part of the bands of Ainara LeGardon and australian songwriter Aaron Thomas, he colaborated with dozens of spanish artists and bands, playing live (close to 1000 concerts) or recording albums (more than 40 records), he worked also as session musician for theatre and film soundtracks.

In 2017 he released “Theremonial, Dark & Exotic Theremin Music.” (Alehop / Beat Generation) a record with 10 original compositions using only theremin sounds, the theremin assumes all the music roles usually related to a band. In his live presentations he plays strickly live loops (no playback or pre-recording stuff is used) with one or two theremins. The second part Theremonial 2.

More Dark, Exotic & Danceable Theremin music” was released at the end of 2019. This albums got very good reviews in spanish media, it was presented live in festivals and venues from Brasil, México, El Salvador, Netherlands, Poland, Libano, Egypt, Jordania, Portugal… and of course all over Spain.

His new theremin project is Therematic, a new concept, the theremin signal is multiplied once be connected to a multitrack sequencer DAW (Ableton). So a simple theremin melody develops ambiences, bass lines, rhythms and whatever you can imagine, like an automatic chain. “Therematic” is his third 100 % theremin album, will released at the beginning of 2021 by Primavera Labels / El Segell.

As journalist he is part of the staff of Carne Cruda, a popular radio show (Ondas Prize winner in 2012) broadcasted through Radio 3, Cadena SER and now through Diario.es He also colaborated with lot of musical magazines (Rockdelux, Vanidad, Rollingstone etc..)
Comments
Theremin today