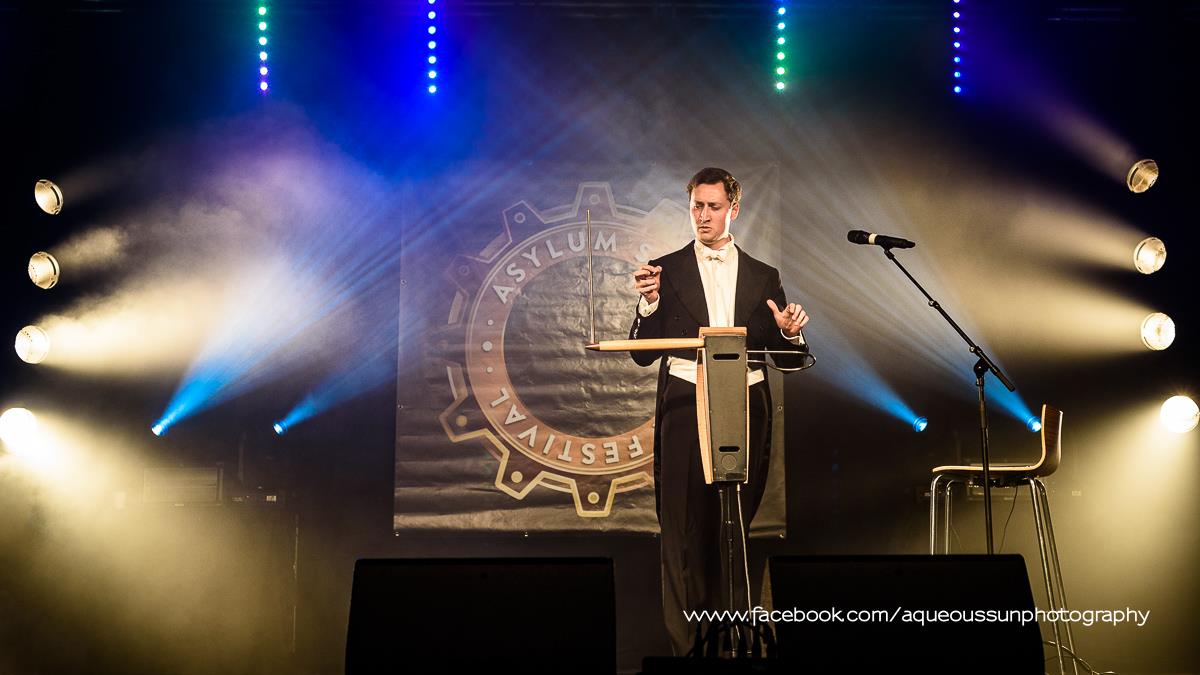 Based near London, Charlie is one of few musicians worldwide to have devoted himself to these instruments. Since beginning to play the theremin in 2005, Charlie’s performances have taken him to venues including London’s Wigmore Hall, Oslo’s Opera House, New York’s Public Theatre, the Tate Britain, the British Library, Glastonbury Festival, the Wales Millennium Centre, the London ExCeL, and Cambridge’s West Road Concert Hall. He has performed many principal orchestral works for theremin and orchestra including Schillinger’s “First Airphonic Suite” (UK premiere), Rózsa’s “Spellbound Concerto”, Herrmann’s “Suite from the Day the Earth Stood Still” and Elfman’s “Mars Attacks!”. His performances have been featured on BBC 1, BBC2, ITV, BBC Radio 3, Channel 4, and Classic FM.

As might be expected, my musical journey did not begin with the theremin. When I was fourteen, I decided to begin serious study of a second instrument, and chose the theremin. I was captivated both by the sound, which seemed to resemble something between a voice and a stringed instrument, and by its complete contrast with what was then my primary instrument, the piano. I also found the instrument’s history fascinating.

Like many others, I was familiar with the sound of the theremin long before I knew about the instrument. But the real revelation came when I discovered Clara Rockmore’s “Art of the Theremin”, heard Carolina Eyck’s 2005 recording of the “Spellbound Concerto”, and watched some early black and white films of the theremin. The sound was captivating: an electronic voice, a ghostly violin, summoned from thin air. Even more striking than this was my first experience playing the instrument. Does such immediate and natural translation of motion into sound occur with any other instrument? Playing is a highly meditative and personal experience, almost like singing through movement. The theremin quickly became my primary instrument.

What is your musical philosophy and what place it occupies a theremin Prospects for theremin and its place in modern music space – how you see them? For what qualities you value this instrument?

Part of what I love about the theremin is the great flexibility and unprecedented sonic possibilities it affords. The theremin was invented at a time when stylistic boundaries in popular music were disintegrating and realigning, and when electronic music barely existed. Thus, it stands at the crossroads of the old and new, the tangible and intangible, and has found homes everywhere (and nowhere). Originally envisaged by composers as a classical orchestral instrument for the home and concert hall (e.g. Pashchenko 1924, Schillinger 1929), it was speedily requisitioned by composers of film music (e.g. Shostakovich, 1931; Rózsa 1945, Herrmann 1951), lounge music (e.g. Revel-Baxter 1947), avant-garde free music (e.g. Grainger 1935/8), and myriad other genres. Accordingly, the history of the instrument is expansive. I greatly enjoy researching the instrument’s repertoire, reflected in projects which uncovered Pashchenko’s Symphonic Mystery, revived Revel and Baxter’s “Music out of the Moon”, and which continue to catalogue and commission repertoire for the instrument. Currently, I am performing regularly with the Radio Science Orchestra, with my own orchestral collective Retrophonica, and in new programmes of original music with pianist and musicologist Paul Jackson, and harpist Holly Lowe. Since there is not really a defined pathway for the professional thereminist, I am always on the hunt for new ideas, music and project ideas: it’s a tremendously energising and exciting journey. I also find the theremin to be the perfect foil for another instrument which I began playing in 2018, the ondes Martenot.

My primary instrument is the Moog Etherwave Pro. I find its linearity and responsiveness to be unmatched and it remains my primary performance instrument. However, nothing can match Lev’s vacuum-tube instruments for their sheer ingenuity. You can hear the inventor’s genius: the timbre shifts organically with pitch, volume, vibrato, even speed of attack despite radical economy of design. Swapping even identical valves has noticeable impact on the instrument’s voice. They are almost living creatures. The instrument’s original name, “Voice of Theremin”, is entirely appropriate. At various points, I had the fortunate and generous opportunity to play some rarer instruments, including a Lev-built Theremin Studio instrument, several RCA Theremins (designed by Lev Termen himself in 1929), a Moog Vanguard, Moog Professional, Moog 91A, and Tony Henk theremin.The tone of the earlier valve-based Moog instruments is just rapturous.

Since the Moog Etherwave Pro is no longer manufactured, I would recommend the the Moog Etherwave Standard with pitch extension module by Thierry Frenkel. It is a great instrument. The best instrument however, is the one you will play regularly. So, try whichever ones you can! The Etherwave Standard would be my pick, but if you want to create harmoniously acceptable sounds with minimal practice, or enjoy creating synthesizer patches, the Moog Theremini might also be worth a look. Practise with attention and introspection, listen to your own playing critically, seek out other musicians. Attend live performances. Follow the advice (and copy the technique) of musicians whose performances you admire. Take a critical view of prettified online videos: they can be easily manipulated and are increasingly untrustworthy. Novelty alone won’t carry a performance: the sound and musicality is what matters. Put the music first. Find something personal you can bring to your musicianship: new repertoire, novel ensembles, new technologies, new directions. Be humble and inspired by the successes and achievements of other musicians. Don’t make yourself the centre of attention. Try to be kind. Try to be on time. And if you can’t manage that … then be very very good.