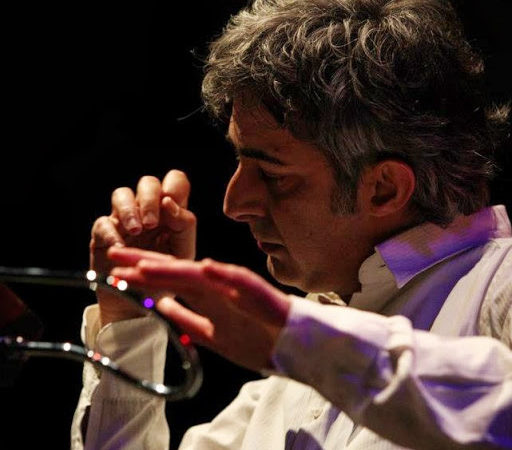 In common with Mrs Rockmore I have the approach with the tool: due to a physical problem, I have met the theremin after an accident – breakup of the ligaments of the left hand while I was playing a flamenco guitar during a live – that has prevented me from continuing my experience with the classical guitar.

In 2000 I saw my Theremin in a shop of musical tools: as a musician playing keyboards and the first moogs in the seventies I knew about the existence of it, even if I thought it was a kind of legend….. I bought it without trying it, sure that I would not have understood a lot about it. I have tried it at home, the first approach has been very technical and little emotional. I have looked for videos on web to study the technical function and I have begun to measure the fields of the spar and to observe the various approaches. The principal feeling that I have about the general use of this tool, then confirmed during the time, refers to a kind of congelation of the tool in the twenties, that partly has damaged it in terms of development and popularization. The pop evolutions see the tool as “noise maker” reducing it to simple effect depriving it of the dignity that it deserves.

I think that the Theremin can be played in every musical kind, for how much I adore the original sound I don’t disdain to filter it with digital elements. The use of it as a controller, don’t exalt me a lot on the contrary. Today it is my principal musical tool, and even if I come from experiences of polyphonic tools, exalts me the possibility of development and search that the tool and its history offer. I have developed a personal approach, diametrically opposite to the Russian classical school, that has the tendency to measure the field and it makes the musician too static in the execution limiting the tool during it, in comparison to the frequencies that it can develop.

Personally I have experimented it in a lot of musical kinds, from the Flamenco to the Tango, from the jazz to the Rock and electronics of all the types (Dub, Minimal, Tekno etc), and recently also with traditional music. I have also had the fortune to play live with the Messers Chups Band Psyco Billy of Saint Petersburg, that has realized an album with Lidia Kavina in 2005. It can be played in every situation, obviously it is necessary to adjust the tool to the demands of the kind and to have good taste in the executions. I like very much to develop it on the low frequencies and I have one technique of mine to turn it into percussions.

Unfortunately I have used few tools, the best of which is the Advantage of the Moog, surely, more tunable, in comparison to the Etherwave that I use. Moreover the possibility of the Advantage of setting the Pitch without getting off the container is a good thing. In Italy, artisans build a good imitation of the valve model RCA: the only limit the encumbrance and the delicacy that create problems for the transport and make it few practical for tours.