Most people who haven’t heard of the theremin have heard it, usually in old science fiction movies like The Day the Earth Stood Still (or spoofs like Mars Attacks). The instrument has a reputation as an oddball, by virtue of its unusual method of playing without touch (players control pitch and volume by moving their arms in proximity to two antennae), its notoriously slippery chromatic sound, and its association with all things alien and strange.

Yet the instrument was popular with U.S. audiences well before its appearance in sci-fi films. A significant surviving reception history documents recitals and concerts during the ’30s and ’40s, often given by women, known as “thereminists,” who played the instrument professionally or semi-professionally. Years before Hollywood cemented the theremin’s association with the alien or otherworldly, critics heard different qualities in its sonority: emotional expressiveness and excessive sentimentality.

This history isn’t widely known or taught, but it reveals much about how electronic musical sound takes on meaning and significance. While we might take for granted that the instrument’s touchless technique and new electronic timbre would naturally register with early listeners as alien and strange, contemporary reviews and commentary upend such assumptions and reveal the extent to which sonorities take on meaning in specific contexts, and in relationship to specific bodies.

A Theremin for the American Home

RCA Victor began producing the first commercial theremin in 1929 after leasing exclusive rights to the patent for a two-year term from its inventor, Leon Theremin. The company marketed the theremin as an instrument for the home, hiding its working parts—oscillators, vacuum tubes, and circuit board—in a polished wooden cabinet. Working with Theremin (an amateur cellist himself), RCA engineers shaped the instrument’s tone to evoke a cello in its mid-range and a violin at the top, sonorities they presumed would appeal to consumers. 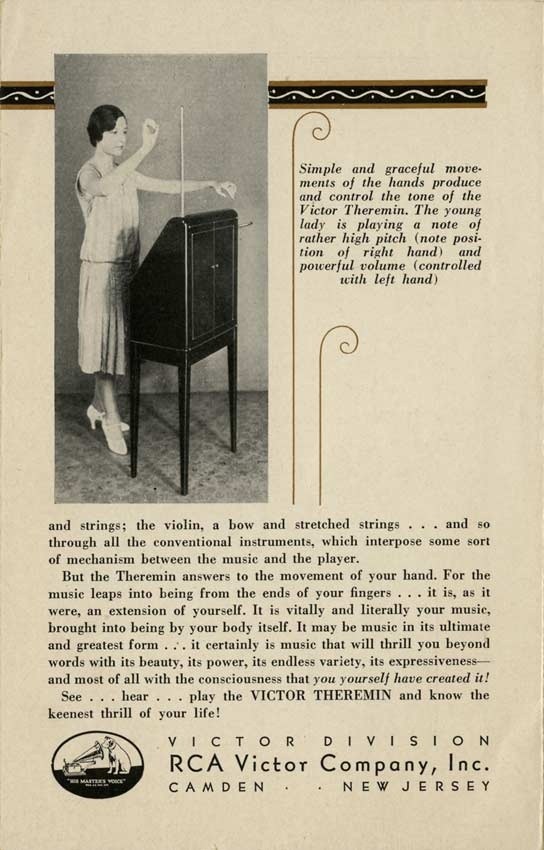 RCA launched a campaign to familiarize audiences with the instrument’s sound. Department stores and music retailers across the country advertised demonstrations and concerts, and a series of weekly radio programs on NBC featured theremin renditions of popular repertory of the day and classical melodies like Camille Saint-Saëns’s “The Swan.” RCA marketed the instrument as a pathway to instant musical gratification for the amateur, promising that anyone could play it “without musical knowledge or training of any sort … without tiresome or extended ‘practice.’” The theremin (RCA hoped) would become “the universal musical instrument,” the piano’s heir apparent in millions of American living rooms.

Claims of universality notwithstanding, this campaign primarily targeted middle and upper-class white women, a demographic frequently associated with (and compelled to take on) domestic music-making and most likely to select music technology purchased for the home. Although men frequently played the theremin in demonstrations and broadcasts, RCA Victor’s promotional material almost exclusively pictured women playing the instrument. In Madison, Wisconsin, the local Ludlow Radio company sponsored several theremin concerts by a Mr. Lennington Shewell, but otherwise emphasized female use. The company launched a search for a “mystery co-ed” at the University of Wisconsin, alleging a gifted thereminist lived among the student body (no record of such a student survives). The local Capital Times gamely took up the publicity stunt, running an image of Ludlow’s office manager Charlotte Hilton with the instrument—although she admitted she did not know how to play it. 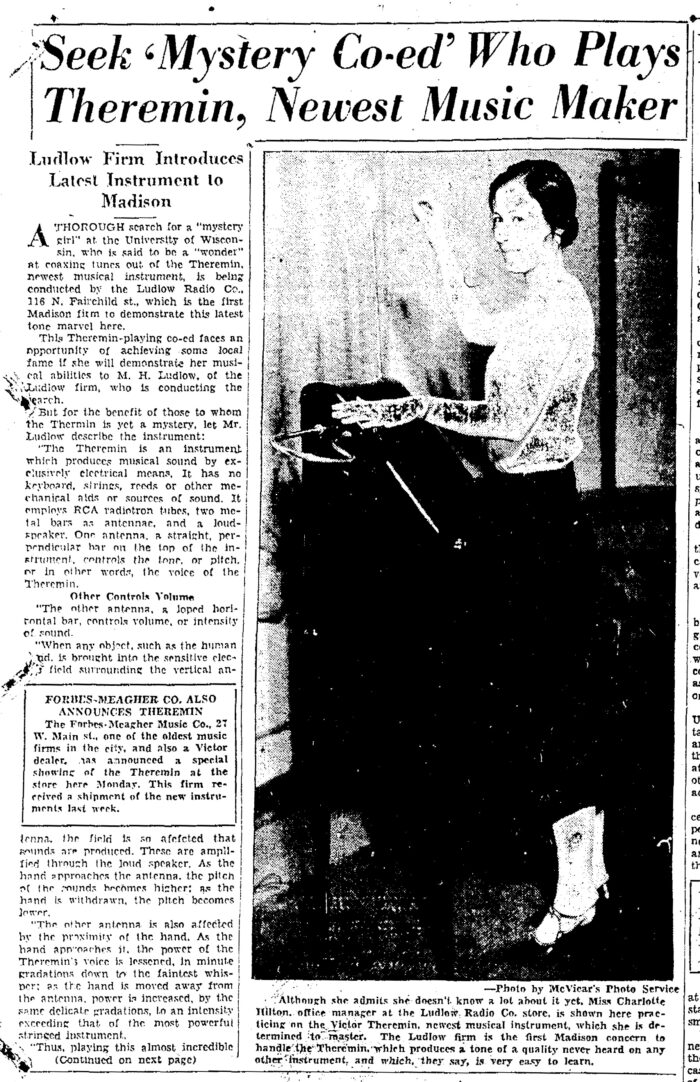 Despite RCA Victor’s marketing efforts, the theremin was a flop: the company sold only 485 models and abandoned the instrument just two years after its launch. Any number of factors contributed to the theremin’s commercial failure, not least of them the instrument’s $230 price tag (roughly equivalent to $3,300 in 2018), which made it a luxury item at the start of the Great Depression.

RCA Victor’s most notorious blunder, though, was its gross misrepresentation of the instrument’s learning curve. It is incredibly difficult to play tonal melodies on a theremin: with no tactile interface and the entire chromatic spectrum available, the instrument lacks any readily apparent means to make a clear break between intervals, and requires a player’s hand to remain absolutely still in order to hold a steady pitch. Try to pick out even a simple melody on a theremin, and you’ll find yourself fighting a battle against continuous glissandi and poor intonation.

Thereminists and their critics

Despite these technical challenges, in the decades following the theremin’s commercial failure a small number of performers, most of them white women, concertized on the instrument in the U.S. and Europe. Among these, Clara Rockmore remains the most celebrated. A former child violin prodigy, Rockmore took theremin technique and virtuosity to a new level, developing a complex fingering method she adapted for each piece she performed. She carefully curated a repertoire for the instrument drawn mostly from works for violin and cello, with slow tempi and a great deal of step-wise motion that minimized the large pitch slides to which the instrument was prone. A typical program included works like Joseph Achron’s Hebrew Melody, Ravel’s Pièce en forme de Habanera, and César Franck’s Cello Sonata in A Major. Her career included national tours as the opening act for Paul Robeson and a performance with the New York Philharmonic under Leopold Stokowski.

Throughout her career, critics lauded Rockmore’s virtuosic playing and sophisticated musicianship. Reviewers frequently remarked on the instrument’s expressive powers in Rockmore’s hands, describing its tone as “warm” and “rich” and comparing it to the cello, violin, and human voice. They heard a “splendid sonority and vivid expressiveness” and a “clear, singing, almost mournful” tone in Rockmore’s playing. To this day, she remains influential among thereminists.

Yet critical response to Rockmore and the theremin was not universally positive. A rhetoric of noisiness threads through this early reception history, employed by (mostly white, mostly male) critics to mark the theremin as sonically obnoxious. During the ’30s and ’40s, when concert thereminists like Rockmore were active, critics often complained about their “excessive” use of vibrato and portamento. There is a practical explanation for such complaints: without the use of these techniques, it is next to impossible to locate pitches, or to create even the impression of accurate intonation, on the theremin.

Critics, however, did not limit themselves to practical questions about technique. Many turned to identity politics to signal their displeasure with the instrument’s slippery chromaticism, taking a cue from the long history of linking “excessive” chromaticism with bodies deemed sexually, racially, or otherwise aberrant. Writers for the New-York Tribune and Modern Music compared the theremin’s sonority to that of a “feline whine,” a fictional Wagnerian soprano dubbed “Mme. Wobble-eena,” and “fifty mothers all singing lullabies to their children at the same time.” Such comparisons are inseparable from the (frequently female) bodies that, in concert with the theremin, produced such sounds.

A few prominent figures in the American new music community at the time were particularly vehement in their criticism. In 1932 Marc Blitzstein wrote in Modern Music that the theremin’s “tone color remains lamentably sentimental, without virility. The most perfected [model], like a cello, exposes most brutally the cloying sound.” John Cage complained about concert thereminists in a 1937 talk (later published in the collection Silence). “When Theremin provided an instrument with genuinely new possibilities,” groused Cage, “Thereminists did their utmost to make the instrument sound like some old instrument, giving it a sickeningly sweet vibrato, and performing upon it, with difficulty, masterpieces from the past. Although the instrument is capable of a wide variety of sound qualities…Thereminists act as censors, giving the public those sounds they think the public will like. We are shielded from new sound experiences.”

The deficiencies commentators like Cage heard in the theremin’s sonority were not simply a response to the sound itself, but to the bodies and performance practices of thereminists like Rockmore. Composers of Western art music have long used “excessive” chromaticism to aurally mark women, and the thereminists’ frequent use of vibrato and portamento easily mapped onto the stereotype of the overly powerful and expressive operatic soprano. Meanwhile, new music proponents like Blitzstein often attacked traditional Western repertory in gendered terms as they sought to define a properly “virile” new music of their own. And we cannot dismiss the impact that the image of a woman performing held then (and holds now): such a vision can provoke both admiration and outrage. 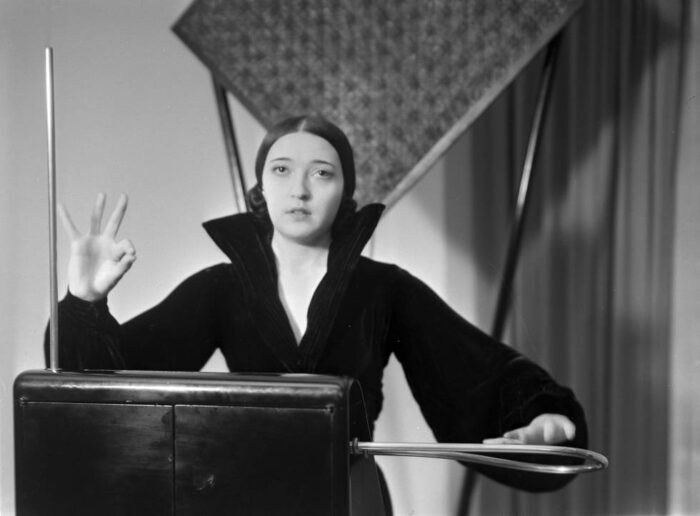 It is composers like Cage who stand as towering figures in electronic music—not performers like Rockmore—and it is his take on the theremin that you’re likely to encounter in a book on the subject. Rockmore held entirely different opinions on the aesthetics of electronic musical sound. Looking back on her career in a 1977 interview with Bob Moog, she lamented that:

From the beginning of electronic instruments, the interest of composers,…builders, and performers, is that of a search for eerie, new or strange sound effects….Modern composers are shying away from melody, frankly because I don’t think they know how to write really beautiful melody….Now they make sound effects and noises when they write.

Rockmore also lamented what she saw as Hollywood’s devaluation of the theremin’s sound to a sonic cliché. She complained that Hollywood exploited the theremin for its “weird noises…you were supposed to be frightened by the sounds. That was not what I wanted to add to. I just wanted to be a serious musician…play Bach!” John Cage might have belittled Rockmore’s repertoire choices as “censorship,” but for her, playing “masterpieces from the past” was a way to confer legitimacy on her chosen instrument.

Contrasting Rockmore’s words about the theremin’s sound with Cage’s demonstrates how their relative positions of power and vulnerability influenced their discussions of electronic musical sound. Both were musicians in elite spheres—one traditional, the other avant-garde. Both worked in niche musical areas and proselytized for their chosen work. Both, at least publicly, disdained musical sounds they did not like or found threatening to their own careers.

Cage is often praised for his commitment to artistic freedom, and it is his definition of freedom—freedom from tonality, from traditional repertoire—that has been taken up and promoted by most electronic music historians. Yet in the case of the theremin, Cage argued for the restriction of performance practices, and historians use his words to explain why thereminists are not properly part of electronic musical history. Rockmore had a different take. When explaining how the theremin fit in the broader electronic music scene, she said, “The theremin is just another musical voice that the artist can feel free to do with what he can.” It is time we expand our own notions of musical freedom. Our histories will only grow richer when we do.